I've been comparing my running volumes to HbA1c levels, and the first stage of the study seems encouraging,

Many people run to keep fit and healthy.If you are a T1 (=have diabetes type 1), one of the crucial measures of being healthy is the level of glycated haemoglobin (HbA1c). The latter reflects how well your diabetes has been managed during the latest three months (the lower HbA1c - the better). I've been meaasuring my runnng volumes (in km) for about two years and comparing them to my HbA1c levels (measured in a lab every 3 months). The results show "more running -> lower HbA1c" relation, but this should not be considered a "scientific proof", since (1) only one person is taking part in the research (2) I can't control for other variables affecting my diabetes and (3) I have only 9 points of observation by now, which is not enough for statistically valid conclusions.

Pic 1. The volumes of running (blue line) are inverted for the sake of comparison to HbA1c 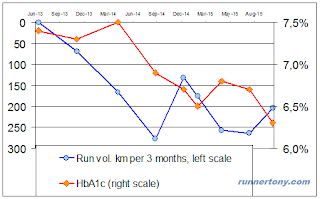 There's something curious if we shift the running volumes time-series by 6 months (e.g., compare HbA1c at the end of October not to running vols in Aug-Oct, but to those of Feb-Apr): 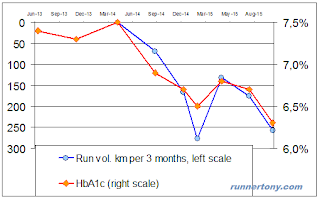 Surprisingly, the two lines appear very close now (at least, the points of change in derivative coincide). I don't think this is something natural, rather a coincidence, Anyway, the research continues. ))

Keep in touch and keep moving!
Posted by Runner Tony at 00:13